I’ve been meaning to write a little something like this for a while now. I have been on Twitter since November 2011. I have been following some of the same people for quite some time now. I’ve lost follows, I’ve gained follows. With that being said, I have gained a good sense on who you should follow if you’re a Cardinals fan.

I can already see it now…

“I’M OFFENDED! I THOUGHT WE WERE CLOSE!”

Yeah, yeah. You guys are all great and I tolerate you all. These are just people who I genuinely think are great follows if you want some good action on your timeline during the games – and if you need some entertainment and knowledgeable tweets without a game on.

Before we begin, this is in no particular order and I believe they are all great.

Dan #1. The man. The myth. The legend. This guy has been a good friend of mine easily for three years. He is the first co-writer that I became really good friends with. He is who I look up to as an amateur writer. The guy can shoot out 1,000 words in his sleep. The articles he write have such a great insight and he is a smart sports guy. There will be things that he writes and I’ll just think to myself, “You idiot.” Although, you can’t agree on everything. The guy knows his Cardinals and beyond. Plus, the guy is just a huge teddy bear who has a heart for everybody – no matter how much people like to attack him. If you’re a sports fan, the first person you follow is Buffa.

The guy is easily my favorite St. Louis Post Dispatch writer. I have been following him for quite a while now – and when he followed me back, I will admit, I fan-girled. I hold no shame in that. He is such a funny and easy-going writer. I look at his writing style as one-of-a-kind perspective. He’s smart, he has a great sense of humor, and he’s just an all around good guy.
Also, his Twitter profile picture is probably one of the best I have ever seen. I strive to have a picture like that one day. Well, because, it’s The Cat.

Just look at it. 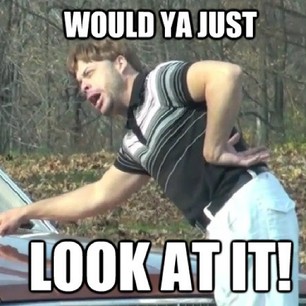 He’s the perfect mix of asshole and soft-hearted. He is easily one of the most sarcastic people I know and he knows how to make me have a chuckle or two. He makes talking baseball fun, knowledgeable, and hilarious. From an outsider’s view, it may look like I hate him, but really, I love the guy. Just like any other person on this list, he’s a smart guy. He has a strange sense of humor if you ask me, so you either like it or you don’t. But if you’re looking to follow someone strictly for baseball knowledge, then he is without a doubt your guy to follow.

Talk about a smart and lovable guy. Bob is the peacemaker of us all. When there is an argument on the good ol’ Cardinals Twitter timeline, leave it to Bob to be the middle ground guy that tries to get everyone to get along. This guy knows his baseball and there is no question about it. Every conversation I have had with him, baseball related or not, I can always say it was genuine. As long as you can handle pictures of his barbecue meals day in and day out, then give him a follow. You will not regret it.

If you enjoy following the Cardinals’ farm system, then this guy is who you need to follow. He writes great article about what all is going on within our farm system. The insight he puts in his articles will give you so much knowledge about our system. I always make sure to look out for his tweets when I’m too busy following our major league guys. If you want to keep up with the farm system during the games, he is your guy to follow.

Dan # 2. The guy is an asshole and that is what I appreciate most about him. He is a great writer and he also hosts a podcast with Cardinals Farm that I thoroughly enjoy listening to (https://twitter.com/MeetMeAtMusial). I highly recommend you give him a follow and take a good look at all of his stuff. I have been following him for quite some time now and I always enjoy a good conversation with him. Meet Me At Musial is easily one of my favorite Cardinals podcasts. It’s a Cardinals podcast that doesn’t make me want to rip my ears off – and that is a jewel to find.

Dan #3. Ahh, Dan. I hate him so very much, but it’s a good hate. The guy is hilarious. He makes videos about the Cardinals and Twitter that never fail to make me have a good laugh. He’s the kind of guy that I wouldn’t mind giving a good punch in the arm, but then a good ol’ hug to follow. That’s just the kind of guy he is. If you’re looking for entertainment, hilarious videos, and relevant GIFs, then Dan is your go-to guy for all your entertainment needs. He stays true to himself which is what I really appreciate most about him. He is always up for meeting people within Twitter and the guy is just flat-out awesome. But I still hate him. He’s a good follow, though.

I only started following this guy pretty recently. Holy shit, is he funny. I have no idea how I had only recently discovered who this guy even was, but he is so damn funny. Not only is he a knowledgeable fan, he makes the best GIFs that my eyes have ever witnessed. For pure entertainment with baseball, I would have no hesitation to point you in the direction of this guy. This guy is also an asshole that you can’t help but love.
(Are you guys starting to see a trend, here? I only like the assholes).

This girl is one of my best friends on Twitter. Alongside me, she overcomes the stereotype of girls knowing nothing about baseball. Every time some ass hat tries to say girls know nothing about sports, it’s like her and I do some Transformers shit and go all-out. She is one of the most down-to-earth people that I have ever talked to and she is a total sweetheart. I am honestly honored to have someone who is basically just like me. If you want some diversity on your timeline, give her a follow. You won’t regret it.

Last, but DEFINITELY not least. Mr. Bruno. Cards Cards. The guy whose website I am currently writing on. My Twitter experience enhanced dramatically when I discovered this asshole. If you’re not following him already, then I have no idea what you’re doing. He is by far one of the funniest and smartest people I know. He is so intelligent about baseball and about life in general. When you first look at him and what he tweets, he comes off as a total asshole. Although, if you get to know the guy, you get to see what intelligence and humor lies beneath. I ONLY SOMETIMES regret following him! But seriously though, follow the guy if you don’t already. It will make your game watching experience so much better.

So, this is a pretty golden list. Take the time to follow all 10 of these people if you don’t already. If you have a problem with any of them or have them blocked for any reason, you’re quite frankly a dumbass. As I said, don’t get offended because I didn’t mention you. Don’t be that way. Just don’t. Please. But I know you will anyway.

I would say I’m a tolerable follow as well.