I was lying in bed in my new home for the first time. I was a homeowner. My adult life had been nothing more than a series of screw-ups that had led me backwards, backwards, backwards. But I had awoken from that idiocy and righted the ship and now I had spent more than a quarter million dollars on a home, and I was feeling pretty good about myself.

It didn’t feel like home quite yet, the furniture was minimal, the walls were bare, the house echoed, the lawn hadn’t been mowed in a month (which in Florida qualifies as jungle), and I had exactly zero blinds on any window, meaning the neighbors could see virtually every step I took.

But I had a bed, and not to give too much information, I had a girl in that bed, and I was finally going to rest easy and sleep well as I was now an accomplished adult.

Then the alarm went off.

It was a fire alarm, and unlike any I had ever experienced. When you live in 500 square foot apartments you basically have one alarm, and it doesn’t work anyway. This alarm was a technology I had no idea about. It combined every alarm in the house and made a pulsation that felt like the alarm itself was going off in my chest. I thought I was having a heart-attack. I felt like I could see the sound waves surging through my house.

I had owned a house for about 8 hours. Did I already set it on fire?

The next half an hour was spent encircling my house in the thigh high grass, looking for signs of burning. I toured the inside of my house, learning where each fire alarm was, wondering which one had decided to kill the house’s new owner on his very first night.

There was no fire. We went back to bed.

To be safe I circled the house again. No fire. “At least,” I thought, “The lawn people will be here in the morning, so if this is my life now, it will be easier to walk tomorrow.” I started googling what to do. I discovered how to tell which smoke detector was going off. This may seem like common sense to you, but I now owned a house with 15 smoke detectors, and I doubt I’d ever lived anywhere else that had TWO. 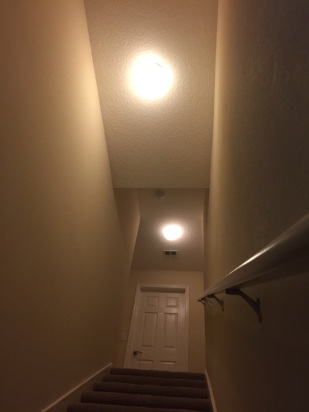 I wasn’t going to figure out a way to get 9½ feet up to deal with a stupid alarm at almost 4 in the morning. It stopped going off. I was going to take the gamble it was done for the night.

At 5:15 it beeped again. At this point I had gone nearly insane. The problem needed to be fixed. I was deliriously tired. The girl had to work in the morning. We needed sleep desperately. My dream house was becoming a nightmare, if only I could sleep long enough to have one. What could be causing this? I did more research. It was time to become a man and fix this problem.

Then, as I read, becoming a man seemed like not such a good idea.

You see, when people had listed the reasons why their alarms had gone off at random times, most times it turned out it was because there was a spider inside of their smoke detector. A spider. A God damn spider.

Let me explain. Biologically, I am a man. My driver’s license says I’m a man. When my body is dissected after I am dead and frozen, the people there will conclude that I am a man.

But I’m really not a man.

When it comes to things men are known for, I don’t really stack up. I can’t fix cars. I don’t spit. I’m not very fond of baiting a hook. I own a screw driver only in the case that I might run out of clean forks.

But the area in which my pores exude the most-least-testosteronic-discharge would be in the area of creepy-crawlies. A fire alarm beeping every two hours seems like a good trade-off for me not having to deal with a spider. The plan was no longer to be a man. The plan was to avoid the spider like the plague. Then, tomorrow, I’d simply put my house back on the market.

At 7:15 I was awoken by something entirely different. The lawn mowers were here. It was easy for me to tell because I had no blinds so I could basically look them in the eye from under my covers.

It was then I decided enough was enough. I had to deal with the spider.

I took a folding chair to the top of the stairs. Standing on top of it, and balancing just so, so that it wouldn’t collapse on me, I stood atop the chair clutching in one hand a trusty spider-beating shoe. My other hand, shaking all the while, went to unscrew the smoke detector. It was like a game; it was me vs. the alarm beeping spider from hell. This was some sort of smoke detector sport that people would actually like.

I unscrewed the smoke detector, shoe ready to spring forward. Only, I saw no spider. Dust started pouring on my arm as I looked for the eight legged enemy. There was none. Beginning to relax, I felt a tickle on my arm.

It wasn’t dust that was continuing to fall on me, it was infinite baby spiders who were now crawling all over my body.

Somehow with the mind to not wake up the girl, I started screaming silent breaths into the air and began beating myself with my own shoe. I am proud to say that somehow I was able to keep my balance atop the folding chair.

But I’m ashamed I said that because it was a lie.

I teetered for a good second or two, beating myself while my legs desperately tried to find some sort of weight balance that would hold the chair together, and in one place.  They failed. The chair folded below me and became a sled of sorts that sent me launching down the stairs at a far higher rate of speed than anyone has fallen down stairs before.  Luckily, not far after the landing of the stairs, was the nice cushion of a wall that broke my fall head first.

Not to be outdone by my fear of spiders, and free from being silent since nobody could sleep through the earthquake my wall demolishing head caused, I ignored my certain concussion and began to scream loudly while still beating myself with a shoe.

The shoe was basically useless though, and these spiders were too plentiful and too small to be stopped under such an attack, so I did the only thing my brain thought to do.  I took off my clothes while screaming and running around the house in terror while slapping my skin with my bare hands. This went on for God knows how long.

When the chaos was over I lay naked on the tile floor of my kitchen, weeping to myself softly thankful that my red, splotchy, beaten skin could no longer feel the small tickle of spiders crawling on my skin. I cried and smiled knowing that it could have been so much worse.

My head hurt, but my head would heal.

The wall was damaged, but that could be fixed.

I had to hire a new lawn company though. They refused to come back.